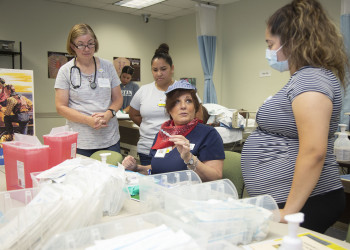 Nursing instructor Audra Xenakis reviews IV techniques with second-year ADN students at the Nursing program's first Nursing Skills Fair. Xenakis was one of three instructors who helped plan the event.Like students everywhere, nursing students can forget some of the things they have learned over their summer break.

That’s why Temple College nursing instructors started a new program this fall to help their returning students brush up on skills they may have forgotten over the summer and gain confidence in their skills before they start their new clinical rotations Sept. 7.

The new program, called the Nursing Skills Fair, is something hospitals commonly do to help staff nurses stay up on their skills. But Nancy Eaton, simulation coordinator for the Temple College Nursing program, said very few nursing schools offer something similar. 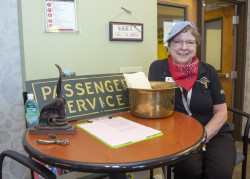 Nursing Simulation Coordinator Nancy Eaton organized the skills fair to give nursing students confidence in their skills before they start their fall clinicals.Eaton, along with nursing instructors Elizabeth Kiesle and Audra Xenakis, researched the topic in nursing journals and came up with best practices for running a skills fair. Among the key takeaways from their research: have a theme and make it fun.

The three decided on a railroad theme for their event. With the help of material on loan from the Temple Railroad Heritage Museum, the lounge on the second floor of the Nursing Education Center was turned into a “depot” where students could come and get a “ticket to ride” for the activities. 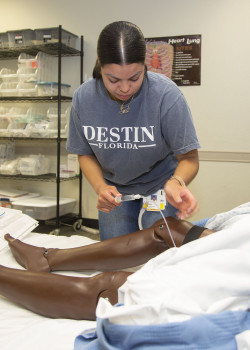 Second-year ADN student Edith Hernandez practices inserting a catheter during the Nursing program's first Nursing Skills Fair.Students then moved on to rooms around the building set up as “train stations” where they would practice critical skills learned during the first year of nursing school such as how to check vital signs, how to administer medications, IV therapy, and use of catheters.

The instructors at each station were dressed like conductors with blue striped hats and red bandanas. Students could check off the skills on their tickets after they had mastered them. Each area had “training” tips the students could take home for review.

Feedback on the skills fair was very positive.

“It was very helpful,” said second-year student Edith Hernandez. “They made it very fun.”

The fair is being offered five days over the first two weeks of classes this fall. Students can sign up to attend on the day of their choice. The entire exercise takes about two and a half hours. 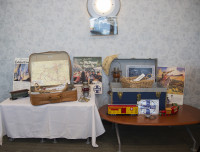 The skills fair had a railroad theme to make it fun for the students.Eaton said the nursing instructors plan to write a paper to share their program with other nursing schools.