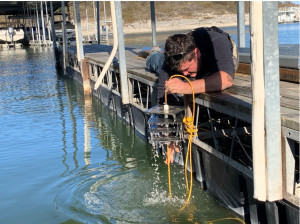 In his new project, Dr. Locklin wants to study the impact of elevated temperatures on mussel shell growth rates and body condition. Research at other lakes has shown that high temperatures in the summer can cause the mussels to lose body mass between the spring and fall. As a result, lakes with initially high infestations of zebra mussels often show reductions in mussel populations over time.

Knowing if and when mussel populations are likely to decline could provide valuable information to agencies responsible for managing the state’s lakes and waterways.

“If Texas mussel populations decline through time relatively quickly after initial invasion, it may not be cost-effective to develop and install costly control equipment or implement costly management programs immediately after invasion,” Dr. Locklin said.

Texas Parks and Wildlife funded the Temple College proposal as part of its Aquatic Invasive Species Research Grant program. Zebra mussels were one of two “top priority species” the department asked for research on.

Dr. Locklin plans to use the grant money to purchase equipment for five sampling stations on each lake. Mussel samples will be collected monthly for 10 months beginning in September and will be taken back to laboratories at Temple College for analysis.

Dr. Locklin said he has three students who will be working on the new project. He and his students have been studying zebra mussels since 2015. To date, 13 students have worked on the research in some capacity. Their research has led to eight presentations at scientific conferences. In 2020, they published their 2015-2016 study from Lake Belton in the international journal, Aquatic Invasions, and are currently preparing a second publication from a 2019-2020 study from both Central Texas lakes.

The research has involved collaboration with biology researchers from Texas State University, The University of Texas at Arlington and Texas A&M University - Central Texas. Temple College has previously received grants from the Temple Health & Bioscience District and the Texas Academy of Science to fund the zebra mussel research.