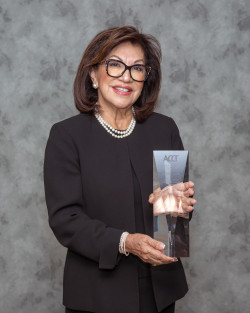 Lydia Santibañez displays the national award she received from the Association of Community College Trustees.

Recipients of this award are chosen based on several criteria, including developing innovative programs, influencing legislation, providing leadership to help solve challenges, and participating in community life. Santibañez became a finalist for the award after receiving the Western Region Trustee Leadership Award from ACCT in July.

“Trustee Santibañez is extremely deserving of this national award,” said Temple College President Dr. Christy Ponce. “She has been a dedicated servant leader on the Temple College Board for 30 years. We are so fortunate to have such an innovative board dedicated to student success and are extremely grateful to Trustee Santibañez for her leadership and years of service to the community and our students.”

Santibañez was recognized during the Annual ACCT Awards Gala, which was held virtually Oct. 8. The ACCT represents more than 6,500 elected and appointed trustees who govern more than 1,100 community colleges. M. Dale Ensign was a longtime trustee at Northwest Community College in Powell, Wyoming, and was the first president of the ACCT.

Santibañez has been a member of the Temple College Board of Trustees since 1990 and served as chair of the Board from 2000-2002. She served on the ACCT Board of Directors from 1994-2000 and also served as board chair of the National Association of Latino Community College Trustees.

In Texas, Santibañez has been an active member of the Texas Association of Community College Trustees and was a founding member of the Texas Latino Trustee Association. As the state chair, she spearheaded a statewide initiative to educate trustees about student success initiatives and secured funding from the Bill and Melinda Gates Foundation to scale this work to the national level.

“In her 30 years of service, Lydia has been an exemplary board member who has made many significant contributions toward promoting community colleges locally, at the state level, and nationally,” said Bob Browder, the current chair of the Board. “She has been a passionate advocate for student success and has advanced critical student success work.”

Locally, Santibañez has served on the boards of the Temple Chamber of Commerce, Temple South Rotary Club, Cultural Activities Center, Temple-Belton Board of Realtors and King’s Daughters Hospital. She also co-founded the Hispanic Leadership Council.

She has served as associate minister of Mt. Zion Baptist Church in Temple and currently serves at First Baptist Temple. She also has served as a chaplain at Scott & White Hospital and the Central Texas Veterans Health Care System in Temple.

Santibañez has received numerous other awards, including the Women of Distinction Award from the Girl Scouts of Central Texas, the American Association of Women in Community Colleges Leadership Award, the Rotary International Award for Service, and the United States Veterans Affairs most distinct Secretary’s Award for Excellence in Chaplaincy. She also has been honored with ACCT Lifetime Membership.

“To receive an award for serving in an area you have a passion for is truly a blessing and very humbling,” Santibañez said. “I accept this award from ACCT on behalf of my fellow Temple College trustees and our president Dr. Christina Ponce. Together, we have made student success our top priority.”