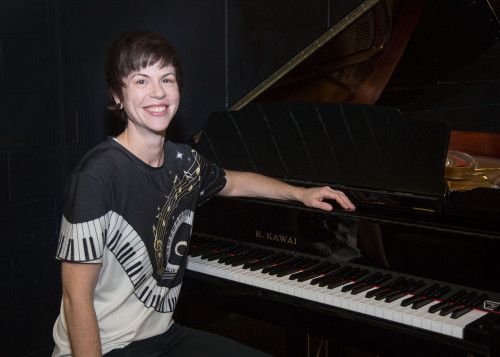 Nan CryarWalk down the corridors of the Performing Arts Center almost any morning, and you are likely to hear a virtuoso classical pianist playing in the Backstage Theatre.

The pianist is second-year student Nan Cryar, who is rehearsing for an upcoming performance of Clara Schumann’s piano concerto – a three-movement piece that features 24 minutes of extremely challenging piano playing.

Cryar has been working on the piece more than five hours a day, seven days a week since mid-July to get ready for her Nov. 19 performance with the Temple College Orchestra.

Cryar was asked in July to perform the piece by the orchestra’s new director, Dr. Alexander Corbett. Corbett selected the piece to mark the 200th anniversary of Schumann’s birth. It is the only piano concerto Schumann wrote.

At the time she was asked to be the featured soloist for the concerto, Cryar says she had heard the piece on the radio once, but had never played it herself. She had to take some time to decide if she could learn the piece in addition to a full load of classes, but in the end, she couldn’t resist.

“I decided I would do whatever it took to learn it,” she says. “The first time I heard the piece I was absolutely in love with it.“

The Schumann piano concerto will be Cryar’s second solo performance with an ensemble in her two years at Temple College. In spring 2019, she was the featured soloist for Richard Addinsell’s “Warsaw Concerto,” which was performed by the Symphonic Band. This piece was composed as incidental music for the 1941 British World War II film “Dangerous Moonlight” about a concert pianist from Poland who is caught up in the destruction of his homeland.

The piano solo in that piece, however, was only 10 minutes long. The Schumann concerto is much tougher.

“It is twice as long and twice as hard,” Cryar says.

Cryar’s exposure to classical music started at an early age.

“My mother is a big fan of classical music,” she says. “I think this was instrumental in my having such a love for it.”

Cryar remembers attending the first performance of the Temple Symphony Orchestra when she was five years old.

“My sisters fell asleep, but I was sitting on the edge of my seat,” she said. “It was so exciting to me to hear the orchestra play.”

Cryar has been playing piano since she was six years old. Before she started taking “real” piano lessons, she had a toy piano that she used to play for hours. She wrote her first composition when she was five years old.

An aunt who played Cryar’s first composition suggested to her parents that she should take formal piano lessons. Cryar began taking lessons from a church pianist, and then took lessons for two years from a music professor at the University of Mary Hardin-Baylor.

When she was 15, Cryar went to study at the world-famous Interlochen Center for the Arts in Michigan. After that, she was playing at such an advanced level that she could not find a local teacher who would take her on.

“I had to drive to Houston to take lessons,” she says.

By the time she was in her senior year of high school, Cryar was spending almost every weekend playing in weddings, musical theatre or as a rehearsal pianist for singers.

The long hours of practicing and performing took a toll, however. When she graduated from high school, Cryar says she was burned out on piano. She decided to go to New York City to study acting instead. She spent seven years in New York acting, painting and running a catering company to meet ends meet. Occasionally, she would get a small piano job, which eventually made her reconsider what she was doing.

“It has taken me nearly that long to discover that there is nothing else I want to do in life,” she says.

Cryar decided that if she was going to have a career in music, she needed to get a degree first.

“You can’t support yourself off the skill, you need to have the educational backing along with it,” she says.

Cryar moved back to Texas to be closer to her family in Salado and decided to attend Temple College.

“It has been fantastic coming here and deciding to pursue music,” she says. “I feel like I am doing what I was supposed to do all along.”

Cryar says she will probably earn her bachelor’s degree in music through the program Temple College offers in partnership with Texas A&M University – Central Texas, then go somewhere else for her master’s degree. Her goal is to teach at the collegiate level and maintain a private piano studio.

Faculty members at Temple College are confident Cryar has what it takes to pursue a career in music.

“Nan is a really talented musician,” says orchestra director Dr. Alexander Corbett. “She is one of the most driven people I have ever met.”