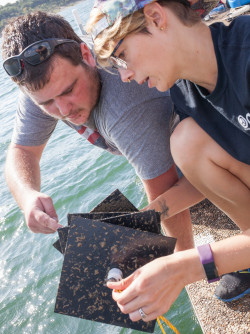 Joey Moore and Brittany Lokcu examine a sampler they pulled up from Lake Belton with zebra mussels on it.Three Temple College students are doing hands-on biology research this year thanks to a grant from the Temple Health & Bioscience District.

In June, the district approved $6,000 to fund three different student research projects related to zebra mussels in area lakes. The students are conducting the research under the direction of biology professors Kimberley Clawson, Dr. Philip Greco and Dr. Jason Locklin.

Zebra mussels are a non-native species that is currently spreading across freshwater ecosystems in North America. Their colonization can have severe ecological and economic impacts, including the death of native mussels, a decline in food sources for native fish species, and damage to infrastructure such as water intake pipes. No successful eradication measures have been established, making zebra mussels one of the most invasive species in North America.

“We spend $1 billion in the United States each year to manage the zebra mussel problem,” Dr. Locklin said.

Josiah Moore, Brittany Lokcu and Tyler Wilson each developed a different research project related to zebra mussels while they were taking the Biology Research Methods class in spring 2019.

Moore is dropping samplers with multiple plates on them in to Lake Belton and Stillhouse Hollow Lake over the next year to measure settlement and growth of zebra mussel populations in the two lakes. Every four weeks, the samplers are pulled to the surface for data collection.

Lokcu is trying to determine if eDNA sampling is an effective way to monitor the presence and density of adult zebra mussels. She is collecting water samples from the lakes and will be working with the Genetics Department at Texas A&UM University – Central Texas to confirm the presence of zebra mussel DNA using a technique called qPCR. She plans to compare her data to the physical counts Moore comes up with on the samplers. 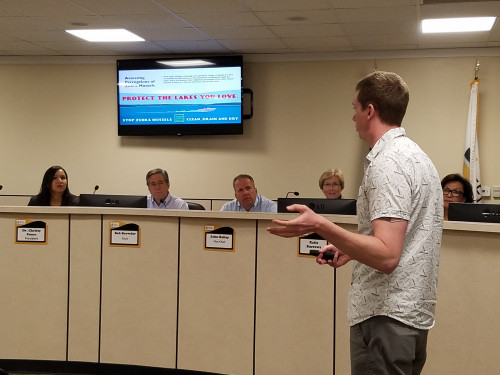 Tyler Wilson explains his research project at the Oct. 21 Board of Trustees meeting. Wilson is studying the effectiveness of the zebra mussel public education campaign developed by Texas Parks and Wildlife.Wilson is trying to measure the effectiveness of an educational campaign the Texas Parks & Wildlife Department developed about zebra mussels. He is doing this by passing out a six-question survey to people who visit the two lakes. He hopes his research will provide insight into mussel knowledge among different groups such as recreational boaters, fishermen and beachgoers.

Dr. Locklin said studying zebra mussels is an excellent way to educate students on the scientific process and its interdependence with the local community.

“Although the mussel invasion in Texas and our local lakes is financially and ecologically costly, it does provide an opportunity to teach students how science works and how to answer scientific questions,” he said.

Dr. Locklin added that studies such as these will be key in adapting to the ecological threat posed by zebra mussels.

“We expect that our work will provide important information for natural resource and lake managers in areas like Texas where mussels continue to expand southward,” he said. “And because their eradication from a system is unlikely once established, we need to understand how to best manage this invasive species in our communities.”

The grant from the Temple Health & Bioscience District was one of the first to be awarded to the new Temple College Biological Research Institute, which was set up last year to help expose Temple College students to real-life research projects such as these.

Members of the Biology faculty are setting up a new Biological Honors program to recognize student researchers. Students who complete the program and have a cumulative GPA of 3.0 or better will be eligible to graduate with Biological Honors. 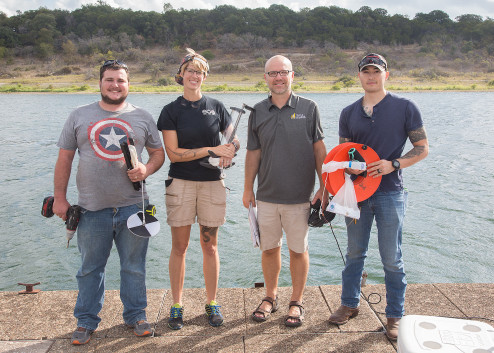