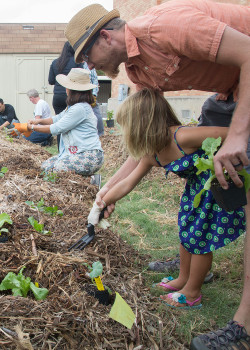 Business professor Isaac Masoner brought his daughter along to help with the planting.The student food pantry on campus will soon have fresh produce, thanks to a new project started by the Temple College chapter of Phi Theta Kappa (PTK) and the Bell County Master Gardeners.

More than 20 volunteers from the two groups showed up Sept. 27 to put the first plants in the garden, which is located at the south end of the Arnold Student Union. Volunteers from the Master Gardeners had prepared the beds for planting over the summer.

The idea to start a garden that would benefit the Leopard Pantry came from former PTK member Kelby Kosel, who is an avid gardener. Other members of the group readily agreed.

“Right now all the Leopard Pantry has is canned food,” said Theresa Anthony, who also is involved with the college’s new Circle of Support project. “I thought ‘Wouldn’t it be nice to have fresh produce?’”

Gillmeister, who serves as Youth Director for the Bell County Master Gardeners, thought it was a wonderful idea.

“This was an immediate need we could fulfill,” Gillmeister said.

The garden was built using a technique known as “No Dig” gardening. Rather than digging up the soil, four inches of mushroom compost was put down in rows, or berms, on top of the existing soil. That compost was then covered with five inches of native mulch and allowed to decompose for three months before planting. Seedlings were planted in holes made in the piles.

Gillmeister explained that this technique helps keep weeds and insects out of the garden. It also requires minimal watering. Water collects between the berms when it rains

Members of PTK are raising funds to build a fence around the garden that will keep small animals away. Donations for fence pickets can be dropped off at the Cashier’s window in One College Centre.

They also are seeking donations of tools and equipment needed to reconstruct the old college greenhouse, which is located right next to the garden. They hope to have it ready to start planting seeds in January.

For a copy of the garden wishlist, write michael.pilgrim@templejc.edu.

Marjorie Gillmeister from the Bell County Master Gardeners explains the planting process to volunteers who came to help plant the new garden on campus.