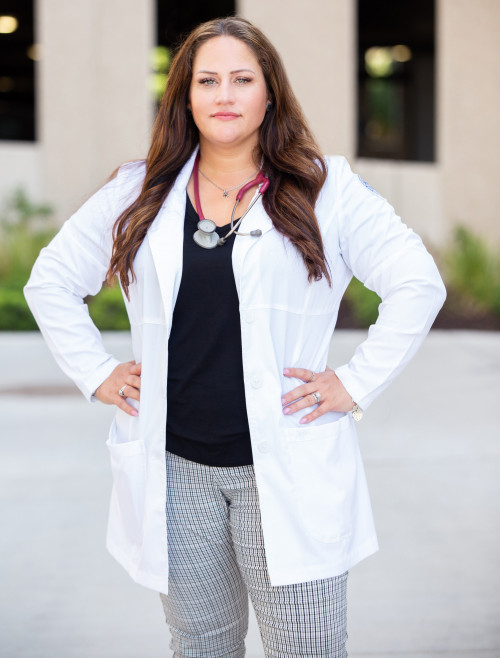 Rachel McKeelRachel McKeel knows how hard it can be for some students to make it through nursing school.

At the time she entered Temple College to pursue a degree in nursing, McKeel was a single mother of four children and was working minimum wage jobs to support the family.

“I failed every class that first semester,” McKeel recalls.

But McKeel, who had dropped out of high school at age 16, knew that getting an education was vital for her and her family.

“I looked at four little faces one day and realized I had to do better for myself and them,” she says.

So she re-enrolled at Temple College two years later and finally completed the Associate Degree Nursing program in 2008.

Fast forward a decade and McKeel is now an established nursing professional who is about to earn her doctorate in nursing practice.

But she hasn’t forgotten where she came from.

That is why McKeel has started a new foundation to help support other motivated, economically disadvantaged women who aspire to careers in the health professions. The new foundation is called the SYS Foundation, which stands for ”Share Your Stethoscope.”

The foundation’s signature program is getting current or previous medical professionals to donate new or gently used stethoscopes to aspiring female health professionals.

“For a new student, a single mother, a person only working a part-time job, this expense can have a great impact,” McKeel says.

In addition, McKeel is asking the donors to attach a personal note to the stethoscopes that will help motivate and inspire the women as they work toward their degrees.

“We all have a story that can inspire someone,” McKeel says. “Whether it be about work, school, family, marriage or life in general, stories can empower others.”

McKeel grew up in Temple and is from a family she describes as “very poor.” Her parents were divorced and there was no history of education in her family.

McKeel says her decision to pursue a career in nursing came when she was in the hospital after the birth of one of her children.

After earning her associate degree from Temple College, McKeel moved to the Dallas area to begin her nursing career at Children’s Medical Center Hospital in Dallas. She worked as an acute care pediatric nurse on the neuro/trauma floor and then moved on to work in the pediatric craniofacial outpatient clinic. After five or six years, she began to work in the Quality, Regulatory and Accreditation departments, and then transitioned into clinical leadership and management nursing positions.

Along the way, McKeel earned both her BSN and a master’s degree in nursing administration from The University of Texas at Arlington. She is currently enrolled in the Doctorate of Nursing Practice program at UT-Arlington and expects to complete it next summer. She also is currently working full time as a nursing leader for John Peter Smith Hospital in Fort Worth.

McKeel also is hoping to raise funds so the foundation can provide students with stipends, as well as assistance with uniforms, shoes, testing expenses, and any additional supplies that may be required.

She also plans to start an awards program to recognize female healthcare professionals who have made an impact through patient care, education or innovative research.

McKeel says she hopes to eventually concentrate on the foundation full time. She offers this advice to aspiring students:

“It may be hard at times, but if you don’t quit, you WILL make it through. School at any level and for any profession will require commitment, effort and perseverance. School and life will take balance, time management and discipline. It will mean saying no to things you love and prioritizing requests to ensure your success. Nothing in life worth having will ever be easy,  but it will be worth it!”

For more information on the SYS Foundation, visit www.thesysfoundation.org.