Orchestra to have a new conductor this fall 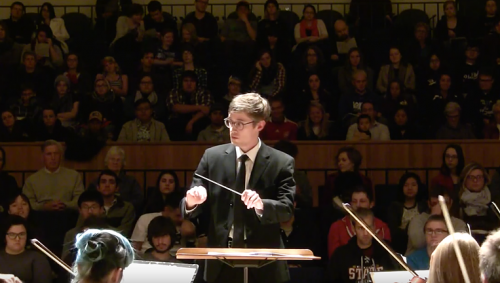 That’s why when it came time to apply for teaching jobs himself, Dr. Corbett says he wanted to find a place that was committed to student success. He found exactly what he was looking for at Temple College.

“Temple College stuck out as being really committed to student success,” Dr. Corbett says. “I really wanted to be part of it.”

Dr. Corbett is starting this fall as the new Director of Orchestral Studies at Temple College. In addition to conducting the Temple College Orchestra, he will be teaching violin and viola, as well as classes in American Music and Music Appreciation.

Dr. Corbett replaces Mary Fairlie, who retired in December 2018 after teaching at Temple College since 1996.

Dr. Corbett will conduct his first concert with the orchestra on Tuesday, Nov. 19. The program will include a piano concerto by Clara Schumann, as well as works by Debussy, Verdi, Berlioz and Mikhail Ippolitov-Ivanov. Nan Cryar will be the featured soloist for the piano concerto. Dr. Corbett says he chose the Schumann concerto because this year marks the 200th anniversary of Schumann’s birth.

Dr. Corbett started playing the piano when he was six years old. A few years later, a string quartet performed at his elementary school and he was inspired to start playing the violin. In college, he also discovered a love for conducting.

He spent the past five years teaching at the University of Minnesota campus in Morris, Minnesota, and also served as principal conductor of the Heartland Symphony Orchestra for three seasons.

Dr. Corbett’s wife, Kate Bae, is a concert pianist who teaches and performs both nationally and internationally.