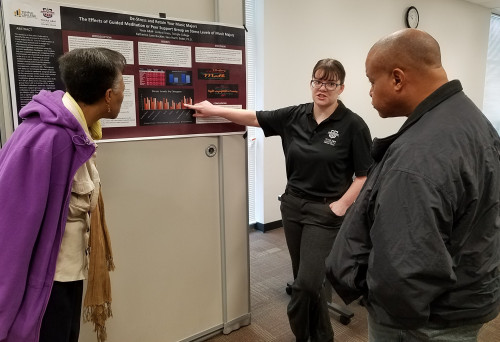 Music student Katherine Buckler talks with staff members Tina Marsh and Derrick Webb about her research on the benefit of meditation.College students often feel overwhelmed by stress – both in and out of the classroom.

Students majoring in music sometimes have additional stress due to long hours of practice, public performances, and constant critiques from their instructors.

Katherine Buckler was one of those students. During her time at Temple College, she changed her major to music and had to deal with a serious medical issue.

“I nearly dropped out,” she said.

When it came time to do a research project for one of her music classes, Buckler knew exactly what she wanted to study: stress among students, particularly music majors. She came up with an informal survey to determine just how stressed her classmates felt. “On average, they were very stressed,” she said.

Buckler learned that reducing stress is important because if it goes unchecked, it can lead to burnout, which is even more serious. A study conducted by Harvard researchers found that burnout can actually stop the learning process.

“Once you get into burnout, it is very hard to overcome it,” Buckler said. “It is much easier to try and prevent burnout than try and help students get through it.”

When Buckler presented the results of her survey to her classmates, they suggested a variety of things that might help reduce their stress – everything from bringing in therapy dogs during finals to offering help with time management.

After hearing all these ideas, Buckler approached her professor, Dr. Sara Harris Baker, about conducting a formal study together outside of class to address possible solutions.

“Katherine came to me with so much passion and drive, I wanted to support her,” Baker said.

Music professor Dr. Sara Harris Baker leads students in a meditation session between classes.Baker and Buckler conducted their research on music majors from both Temple College and Texas A&M University – Central Texas. During a two-week period, students were asked to come in for 10 minutes of guided meditation a day, Monday through Thursday. The meditation was done in November, which is one of the most stressful times of the year for students.

After the meditation sessions were over, students reported a significant reduction in overall academic stress, as well as decreased stress in specific areas such as their music courses and recital performances.

Teri Johnson, another member of the music faculty, said the meditation sessions Baker and Buckler offered also helped build a greater sense of community among their students.

“Our group is supportive anyways, but this added an extra layer of support,” she said.

Most exciting, Baker said, was the fact that students reported decreased stress at home, which is not something faculty members usually have much control over.

“This is a tremendous opportunity for faculty members to help get rid of stressors that are keeping students from learning,” Baker said.

Baker and Buckler presented the results of their research at the National Association for Music Educators Conference in November 2018 and will be presenting it again at a College Music Society Conference in March 2019.

“Meditation as the next big thing in education,” she said. “Many other studies have found that mindfulness is effective in everyone from preschoolers to senior citizens.”

In January, Baker and Buckler presented their research to faculty and staff members at Temple College. Baker encouraged fellow faculty members from throughout the college to try meditation in their classes.

“Having just a few minutes a day when we are unplugged from constant stressors can really be a help to students,” she said.

Baker said meditation can be done either at the beginning, middle or end of class. Used at the beginning of a class, she said it can serve as a “palate cleanser” to help students prepare for learning something new. In the middle of a long class, it can be used to give students a mental break before new information is presented. At the end of class, it can be used to help students reflect on what they have learned and send them out on a positive note.

While some faculty members may be reluctant to devote class time to meditation, Baker said the results are worth it. “If students are not mentally prepared to learn, you will just have to spend time re-teaching the topics,” she said.

Baker said faculty members don’t have to be experts to facilitate guided meditation sessions for their students. There are several good apps that can be used for this purpose, as well as YouTube videos. She also recommends a book titled “Everybody Present: Mindfulness in Education,” which is available online at no charge through the Temple College library.

Baker said staff members could also use meditation to help students one-on-one. Student success coaches, for example, could encourage students who appear stressed when they come in to download an app on their phone such as Headspace or Calm.

After seeing the overwhelmingly positive impact of meditation, Baker has decided to offer drop-in meditation sessions that are open to all students. The sessions are being held in the Performing Arts Center lobby at 9:15 a.m. Monday-Thursday.

Buckler will be graduating from Texas A&M University – Central Texas this spring with a bachelor’s degree in music and hopes to continue research on meditation as she pursues graduate studies at Texas State University.

Scholarships available for adults interested in training for healthcare careers