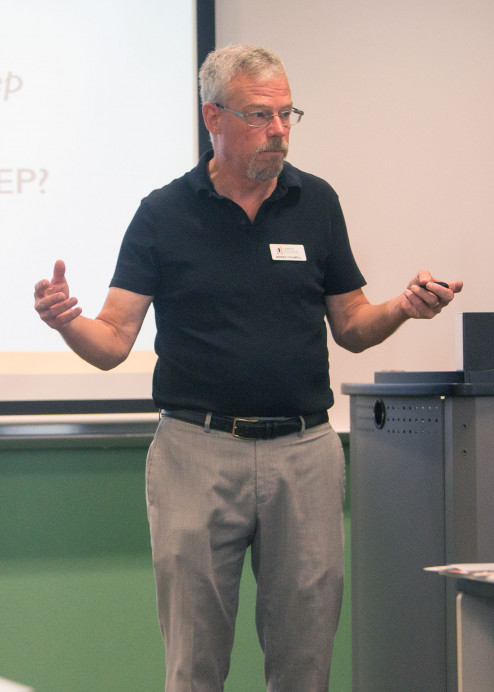 Brent Colwell was one of four representatives from Temple College who attended a Poverty Summit hosted by Amarillo College in June 2018. Colwell is helping launch a new initiative at Temple College.Nationwide, two-thirds of community college students who leave before the end of the semester say their reasons for doing so have nothing to do with academics.

Trying to address some of these reasons is the goal of new campuswide initiative that Temple College is starting this fall.

“We want to minimize non-academic hurdles so our students have a better chance of success,” said Dr. Mark Smith, vice president for educational services.

Temple has a good blueprint to follow from Amarillo College, which started a similar program in 2011. That program has increased student completion rates by more than 30 percent.

Last summer, four representatives from Temple College went to Amarillo to learn more about their program.

Those involved with planning the new initiative stress it is not something Temple College can do on its own. The college plans to partner with organizations throughout the city to take advantage of resources they have to offer.

“In many cases there are services available, we just need to connect people,” Smith said. “Right now, many of these services are siloed across the community.”

The college kicked off the new initiative by hosting two forums the first week of classes for faculty and staff members who are interested in becoming involved with it.

The next step is to ask students to participate in an anonymous “Financial Wellness Survey” that will give administrators some good data on what students’ greatest needs are. In addition to asking students about their financial situation, it will ask if they are experiencing issues such as food insecurity or homelessness.

“A great place to start is with data,” said Dr. Shelley Pearson, associate vice president for health professions and one of the Temple College representatives who went to the conference in Amarillo.

The survey will be administered to students from Sept. 24-Oct. 15 and the college will receive the results next spring. To learn more about the survey, visit trelliscompany.org.

Pearson noted that having good data will enable the college to apply for grants to fund the new initiative. Amarillo College obtained grant money to fund two social workers on campus.

Brent Colwell, director of the division of fine arts and another faculty member who attended the conference in Amarillo, said it could take 5 to 7 years to get all the pieces of the initiative in place. These pieces include everything from improving communication on campus to training faculty and staff on the socioeconomic and cultural barriers students face.

“It takes time to change a culture, but it can be done,” he said.

Leaders of the new initiative hope to eventually extend it to other parts of the community, including the local school districts.

Anyone interested in being part of the new initiative should contact Pearson at shelley.pearson@templejc.edu or Colwell at brent.collwell@templejc.edu.