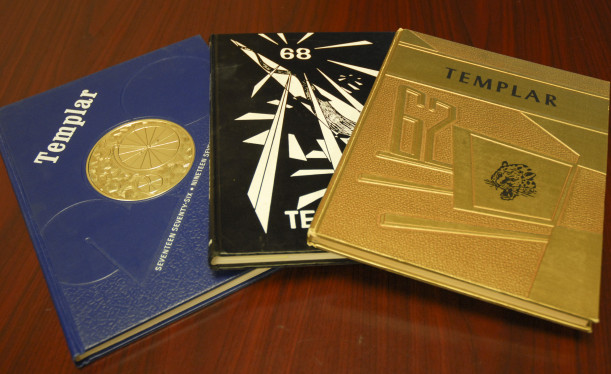 The Temple Junior College yearbook, known as the Templar, was published between 1927 and 1980.A recently completed project will make it easier for those who would like to relive memories of their years at Temple Junior College (now Temple College) or who have an interest in the college’s history.

Temple College’s Hubert M. Dawson Library, in partnership with the University of North Texas, has made 60 yearbooks available online through a project known as the Portal to Texas History. The digitized yearbooks may be found at https://texashistory.unt.edu/explore/partners/HMDTC/.

Kevin Lightfoot, the librarian who coordinated the digitization project, said the online yearbooks allow for both increased access and better search functionality. “Digitizing the yearbooks is a great way to preserve a piece of Temple College’s history and provide greater access to our archival materials,” Lightfoot said. “Having the yearbooks in a digital format allows users to search the collection for people, organizations, sports teams, events, etc.”

The Temple Junior College yearbook, known as the Templar, was published between 1927 and 1980. Due to financial constraints during the Great Depression, the college did not publish a yearbook from 1931 through 1935. When the Templar was published again in 1936, it was produced as one volume with Temple High School’s yearbook, The Cotton Blossom. This lasted through 1946. After 1980, there was a lack of interest in creating and purchasing the Templar, and it was discontinued.

Rose Anne Brasher, Temple Junior College’s library director from 1956-1995, contributed to the Temple College Foundation in order to fund the yearbook digitization. Prior to her retirement, Brasher made an effort to obtain every edition of the Templar for the college’s archives.

“Without her dedication to preserving the college’s history, this project would not have been possible,” Lightfoot said.