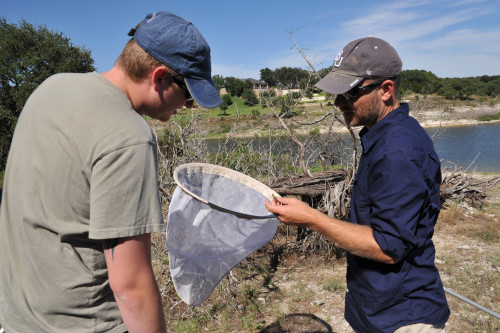 Jason Locklin (right) works with a student at Lake Belton.Temple College biology professor Jason Locklin presented his first scientific study at the 2000 annual meeting of the Texas Academy of Science and later received grant support from the organization to help with his Ph.D. dissertation.

Now, just 15 years later, Locklin is getting prepared to serve as president of the organization, which was founded in 1880 to promote scientific research in Texas colleges and universities.

Locklin is currently president-elect of the TAS, and will serve as its president during the 2016-2017 academic year. He served as vice president of the organization in 2014-2015 and was named a Fellow of the Academy in 2015.

“It is certainly an honor to serve an organization that has such a rich history and a mission that promotes scientific research and science education in Texas,” Locklin said.

Locklin has been teaching at Temple College since 2002 and currently serves as chair of the Biology Department. He also is the faculty co-sponsor of the Temple College Science Club, which is a collegiate chapter of TAS.

In addition to teaching General Biology and Human Anatomy & Physiology, Locklin teaches a Research Methods course to introduce community college students to biological research. Under his direction, students have conducted research on a variety of topics, including monarch butterflies, dragonflies and zebra mussels. His students have also presented their work at the TAS annual meetings, and two have received the top undergraduate research grant awards for their research proposals.

“I absolutely love having the opportunity to get our Temple College students to the TAS annual meetings each March,” Locklin said. “Not only does it provide them an avenue and rather rare opportunity to present their work alongside undergraduate and graduate students from four-year colleges and universities, but it also highlights the contributions our students and faculty are making in scientific research in the State of Texas.”

Temple College is one of only a handful of community colleges that are members of the Texas Academy of Science. According to the organization’s historian, Ray Mathews, Locklin will be the first community college instructor to serve as TAS president.

“Temple College’s participation with the Academy certainly boosts our reputation among faculty from research institutions, but I also hope it directs some of our local high school graduates with STEM ambitions to Temple College,” Locklin said. “There are vast opportunities in the sciences right here in Temple, and TC students and faculty have demonstrated that with our active participation in the Texas Academy of Science over the last several years.”

Locklin himself is an example of a student who took advantage of the science opportunities available at Temple College. He received his A.A. in biology from TC, then went on to earn his B.S. and M.S. in aquatic biology from Texas State University-San Marcos. He earned his Ph.D. in biology from Baylor University.

“As a former Temple College student, I love that I’m able to now teach here,” Locklin said. “My good friend and mentor, the late Ed Morgan, would occasionally say to me that he couldn’t believe he got paid to do what he loved so much – to teach. I too echo that sentiment.”

Temple College recognized as a leader in student success initiatives