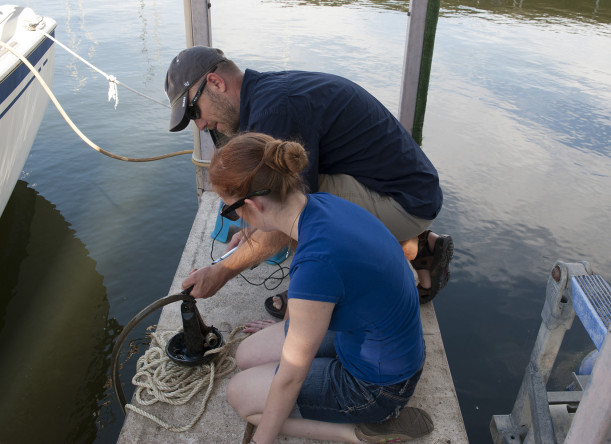 Garcia will use the grant to conduct a research study titled “Vertical distribution, colonization, and growth of the invasive zebra mussel (Dreissena polymorpha) in a subtropical reservoir in central Texas.” The study will be conducted this year at Lake Belton, which has seen an influx of zebra mussels since 2013.

Garcia’s proposal, which was submitted to the Academy in January, was reviewed by zebra mussel experts throughout North America. She was one of three undergraduate students in the state who received TAS research grants this year.

“We are very proud of Devin and the work she has proposed for funding,” said biology professor Jason Locklin. “This study should help us better understand how these cold-adapted mussels are surviving in subtropical systems, such as Lake Belton.”

Garcia has been conducting her research under Locklin’s direction. She took his Research Methods class in spring 2015 and has continued to conduct independent research with him.

Garcia received the award at the 2016 annual meeting of the Texas Academy of Science, which was held March 4-6 at Texas Tech University Llano River Field Station. At that meeting, Garcia presented a paper that was based on her preliminary research on zebra mussels in Lake Belton. The paper was titled “Seeking refuge in a warm subtropical reservoir: How are zebra mussels surviving these waters?”

Zebra mussels initially appeared in the Great Lakes in the mid-1980s, and quickly spread down the Mississippi River, its tributaries, and into parts of Texas. Their colonization has led to several ecological and economic impacts, including the death of native mussels, a decline in food sources for native fish species, and damage to infrastructure such as water intake pipes. No successful eradication measures have been established, making zebra mussels one of the most invasive species in North America.

Garcia’s study will look at the density of zebra mussels at different water levels to determine if there is a correlation between water depth and temperature and mussel distribution and growth.

Garcia is the third Temple College student to receive a research grant from the Texas Academy of Science. Previous recipients were Josh Huckabee (2011) and Renee Brammer (2013). Huckabee also worked with Locklin and Brammer worked with Shannon Hill.

“The grants that our students receive from the Texas Academy of Science underscores the significant contributions our students are making in the scientific community with their work,” Locklin said. “We are fortunate to be able to provide these research opportunities to our students as we continue to build a generation of strong scientists right here at Temple College.”