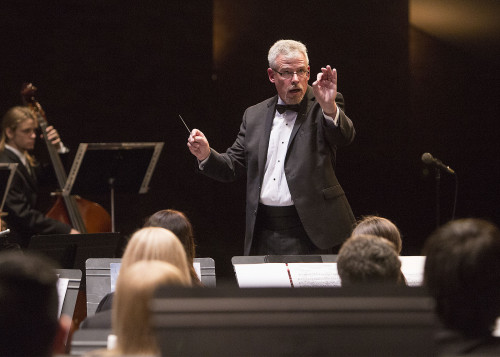 Brent ColwellBrent Colwell, a veteran music educator and statewide leader in his field, has been named the new Director of the Division of Fine Arts at Temple College.

Colwell will replace Tom Fairlie, who is retiring this month after a serving as director of the division since 1990.

Colwell is currently the Director of Bands at Temple College. Fairlie recruited him to join the college faculty in 2007. At that time, Colwell was Director of Bands at Temple High School, and had numerous consecutive years of award-winning performances at UIL contests in both marching band and concert band. Within a year of coming to the college, he successfully rescued its band program, which had been in decline. He also started establishing himself as an area-wide leader in his field.

“During my 25 years at Temple College, I have not encountered a faculty member with the same combination of leadership skills, drive, intelligence and vision,” Fairlie said. “His record of service and involvement in his profession is simply unmatched among his peers.”

Colwell is the 2016 recipient of Temple College’s Barnhart Teacher of the Year Award, which includes a $2,000 stipend. The award will be presented at the College’s May 14 commencement ceremony in Belton.

Colwell holds a Bachelor of Music Education degree from Southwestern Oklahoma State University and a Master of Science Degree with an emphasis on music from the American Band College of Southern Oregon. He is an active member of five different professional organizations and currently serves as chair of the Texas Community College Band Directors Association. He was nominated by his peers to the Phi Beta Mu Society of Texas, an international bandmaster’s fraternity.

Colwell started and administers the annual Temple College Band Invitational Festival, and has served as a judge or a clinician at more than 150 statewide events. He has chaired the recruiting committee for the Temple College music program, and served as Interim Chair of the Performing Arts Department during the 2013-14 school year.

“Brent’s experience and knowledge will allow us to continue to move our Fine Arts program forward,” said Temple College President Dr. Glenda O. Barron. “I am excited about the future of our program under Brent’s leadership.”

The Division of Fine Arts at Temple College includes the Performing Arts Department and the Visual Arts Department. Both are noted throughout the state for their excellent programs. Temple College has been working with Texas A&M University-Central Texas to offer a bachelor’s degree program that will enable graduates of these programs to continue their education in Temple.