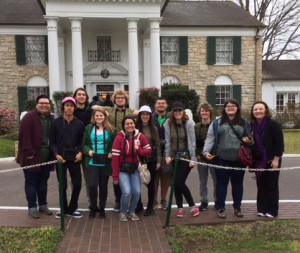 Trip participants pose for a photo in front of Graceland, which was the home of Elvis Presley.A trip to Memphis over spring break gave some students who are studying music at Temple College an opportunity to learn about American music history firsthand and expand their performing experiences.

Voice instructors Dr. Sara Harris Baker and Teri Johnson took 12 students on a trip to Memphis March 16-19. The group visited well-known museums such as Graceland (Elvis Presley’s home), attended several musical performances, and gave a performance of their own in a historic venue.

“Graceland was fun and was a great way to start our visit along with enjoying some Memphis BarBQ at the famous Rendezvous Restaurant downtown,” said Johnson, who previously lived in Memphis. “The students really enjoyed the bus tour through Memphis, seeing the sights and hearing the tour guide who also sang and played guitar while explaining Memphis history.”

During the jam-packed four-day trip, the group heard music in every style from opera and musical theatre to blues and soul. Performances they attended included the musical “The Bridges of Madison County” at the Playhouse on the Square and a performance of the Iris Orchestra with Opera Memphis.

On Sunday, March 19, the students sang for a very appreciative congregation at the Germantown Presbyterian Church, which Johnson and her husband used to attend. Their performance included selections from the program the Temple College Chorale will present on campus April 4.

“I think it definitely helps to get more real-world experience,” said Hannah Gilmore, who plans to pursue a career in vocal performance.

For Gilmore, the trip was the third off-campus experience she has had during her time at Temple College. Last year, she went to New York City with the Chorale to perform at Carnegie Hall and the year before she went with a group to hear “Madame Butterfly” performed by the Houston Grand Opera.