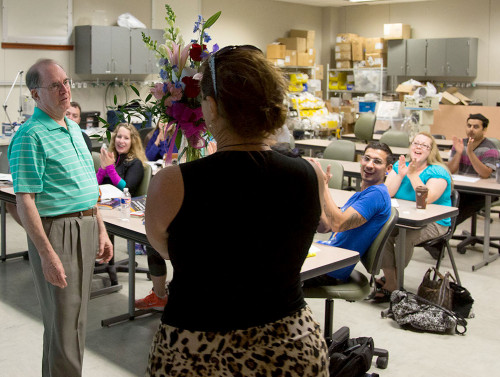 Jennifer Graham, director of the Temple College Foundation, surprises Bill Cornelius with the news that he was selected to receive the 2017 Barnhart Teacher of the Year Award.Dr. William “Bill” Cornelius, who has taught respiratory care at Temple College for more than 40 years, has been selected to receive the school’s 2017 Barnhart Teacher of the Year Award. The award includes a $2,000 stipend and the winner becomes Temple College’s nominee for a statewide teaching excellence award sponsored by the Minnie Stevens Piper Foundation.

Cornelius joined the Temple College faculty in January 1975 as an instructor in the Respiratory Therapy program. He was named director of the program in 1982 and has held the position ever since.

“Dr. Cornelius has shaped and molded the Temple College Respiratory Care program into one of the best programs in the state,” said David Fry, the program’s Director of Clinical Education. “He is passionate about respiratory care and his passion is contagious.”

Cornelius’ students pass national credential exams on par with baccalaureate program graduates and are equally as competitive and often preferred by employers over other graduates because of their work ethic, knowledge and performance. Many of his former students have gone on to become supervisors, department heads, college faculty, attorneys, physicians and physician assistants.

“One would be hard pressed to seek medical treatment within 150 miles of Temple and not run across at least one therapist who Bill has not directly impacted,” Fry said in his nomination letter. Fry himself if a graduate of the program under Cornelius.

Samaria Adkinson, another graduate of the program, said Cornelius is “truly the epitome of excellence in teaching.” “Dr. C taught me, by example, the difference between a job and a career,” Adkinson said. “A job is something one does and a career is something that becomes a part of oneself.”

Each year, Cornelius takes a student team to the Texas Society Respiratory Care annual convention to compete in the “sputum bowl” trivia game. Temple College teams almost always make it to the finals and on several occasions have won the state tournament, beating many four-year programs in the process.

Cornelius has served on the boards of numerous professional and civic organizations and is active in the Temple College Faculty Council. He also has been a reviewer for the past several editions of Egan’s Fundamentals of Respiratory Care.

May 11, 2017 |
Awards and Recognition Faculty
Previous

Graduation her “proudest achievement” for Hutto mother of four