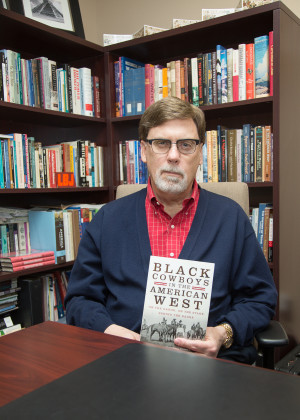 Doug HalesBefore the 1960s, few historians studied or wrote about African-American contributions to the American west.

“So much of black history was not part of American history,” says Dr. Doug Hales, professor of history at Temple College.

Hales wanted to add to our knowledge of African-American history, so for his Ph.D. thesis at Texas Tech, he researched the Cuney family of Texas. Norris Wright Cuney, who was the son of a wealthy white plantation owner and slave holder named Philip Cuney, was one of the most influential African-American politicians in 19th century Texas. He served as collector of customs for Galveston and led the Texas Republican Party in the years that followed Reconstruction in the South. His daughter, Maud, was a successful pianist, musicologist and playwright who at one time was engaged to noted African-American scholar and civil rights leader W.E.B. DuBois.

Hales’ research on the Cuney family took him to four states and the District of Columbia. A book based on his research, titled A Southern Family in White and Black: The Cuneys of Texas, was published in 2003 by Texas A&M University Press. Hales hopes to someday conduct additional research on the history of blacks in Galveston.

Hales also has researched the family of a black cowboy named Daniel Webster Wallace. Wallace, who was also known as “80 John,” was a former slave who ran away from his job as a farm laborer to join a cattle drive when he was 17 years old. He became a successful cowboy and went on to found the largest black-owned ranch in Texas, which is still owned by his descendants.

“One-third of the early cowboys were black or Hispanic, but they were almost never featured in Western movies or books,” Hales says.

An article Hales wrote about Wallace was included in a book titled The Cowboy Way: An Exploration of History and Culture that was published by Texas Tech Press in 2000. Last year, the same article appeared in a book titled Black Cowboys in the American West: On the Range, on the Stage, behind the Badge, which received the Ray and Pat Browne Award for Best Edited Collection in Popular Culture and American Culture.

Hales does not often talk about his research, but he says sometimes students will ask if he has written anything. He then has the opportunity to tell students about his work in the context of his classroom discussions. He talks about black cowboys in his Texas History class and his American History II class.

Teaching history is actually a second career for Hales. He worked in the jewelry business for 20 years before returning to college to get his Ph.D. in history. He has been teaching at Temple College since 2002.

What advice does he have for others who dream of pursuing their passion?