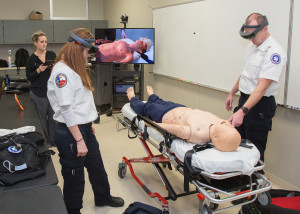 All of a sudden, on a nearby television monitor, the mannequin appears lifelike. His face has a painful expression on it and he brings a hand with a clenched fist over the center of his chest – the natural reaction for someone who is having a heart attack.

Moments later, “virtual” electrodes and defibrillator pads appear on the patient’s chest and he jerks as he is shocked back to life.

These Temple College paramedic students are among the first in the country to use a new “augmented reality” system to aid in their training.

The system, which was developed by a San Antonio-based company called MedCognition, can superimpose a lifelike image over any type of mannequin. Students see the image either through a Microsoft HoloLens that is worn around their head or on a monitor that carries the same image. A tablet with software on it enables instructors to run various scenarios.

Temple College was able to purchase the system with the help of Perkins grant funds, which support career and technical education.

Neil Coker, who directs the college’s clinical simulation programs, said teaching can be a challenge when students are just looking at expressionless mannequins. This is particularly true for EMT and paramedic students, who need to quickly determine a patient’s condition.

“That first impression helps determine the sense of urgency − is there time to do a detailed history or exam or do I need to react immediately?” Coker said. With the augmented reality – which is also known as mixed reality — students are able to see details such as skin color or whether a patient is sweating. They are still able to touch the mannequin underneath and practice procedures such as intubating the patient or inserting an IV. The system also records the exercises so instructors can play them back and “debrief” students on how they performed.

While the augmented reality system is particularly valuable for EMT and paramedic students, Coker said it can be used with almost any health professions course. Faculty in the Associate Degree Nursing program have used it in a class about drugs for managing seizures. The mannequin was put into a seizure, and the students could see the effect that various drugs had.

Coker said the system will be used later this semester in a joint exercise for paramedic and dental hygiene students. A mannequin will be taken to the Dental Hygiene Clinic for a scenario in which a patient experiences an emergency while in a dental chair – a situation Coker said has actually happened. Dental hygiene students will get to practice emergency procedures they have learned and the paramedic students will take over the case from there.

By this summer, Coker said he expects to have software that will enable faculty members to run scenarios on infants, pregnant women and young children.

After seeing the new system in operation for the first time, paramedic student Chris Coates said he likes being able to see things in the augmented reality before he sees them on real patients.