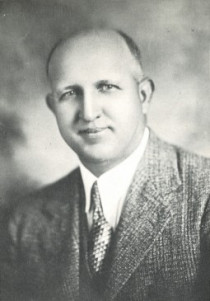 Dr. L.C. ProcterDr. L.C. Procter, superintendent of the Temple public schools, also became the second president of Temple Junior College in 1928. While the college was a part of the public school system, the superintendent also served as the college’s president. Procter held degrees from Texas Christian University and had been superintendent of Temple public schools since 1921. He was also was instrumental in the establishment of a college in Temple, having served on the Junior College Committee of the Temple Chamber of Commerce. Procter left Temple in 1939 after three years of controversy. In 1936, the Temple School Board offered him a three-year contract, which was later vetoed by the Temple City Commissioners. Procter protested this decision and eventually the issue was settled by the Texas Supreme Court in 1937, after which he served out the remainder of his contract before moving on to work for the Texas Education Agency.

September: Temple Junior College began its first academic year as part of the Temple public school system. As part of the school system, the college shared administrators and faculty with Temple High School and held classes during the day, instead of the evening. On the 26th, the college announced that it would form a football team. 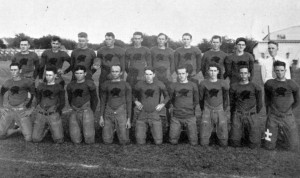 October: On the 2nd, the Luncheon Club met for the first time. The Luncheon Club, founded in order to familiarize students with service organizations in the business world, included the entire student body and was the longest-lasting social club in the college’s history. On the 11th, Temple Junior College played its first football game against Westminster Junior College and won 13 to 2. On the 22nd, music was introduced through the formation of glee and choral clubs.

November: A pep squad was formed to support the football team. They wore orange wool sweaters with a black leopard’s head. On the 14th, the newly formed French Club met for the first time.

February: On the 15th, the college entered into the Junior College District One-act Play Contest, losing to Lon Morris College.

Fall: During the fall semester the college added debate and a Spanish club to its extracurricular activities.

October: On the 18th, a bonfire and parade were held to celebrate Temple Junior College’s first victory of its second football season. Temple played Hillsboro Junior College and won 6 to 0, making up for their defeat in the 1928 season.

December: On the 27th, alumni gathered for the college’s second homecoming banquet.

February: On the 6th, the college faculty entertained students with a stunt night, starting an annual tradition.

September: Temple Junior College hired its first student worker. The student worked as an assistant in the chemistry lab in exchange for tuition.

December: On the 2nd, the Kiwanis Club, which had sponsored the football team during the 1930 season, held a luncheon during which the team’s numerous losses and lack of community support were discussed.

January: On the 14th, the school board added $400 to cover the deficit in the college’s athletic budget caused by the football team. It was decided that a football team was too much of a financial burden. Community support was centered on the Temple High School football team, and therefore there would no longer be a college football program.

May: On the 8th, the championship debate teams were invited to debate before the Texas Senate, debating for 1.5 hours on free trade. Starting with the 1930-1931 school year, Temple Junior College did not print the Templar yearbook due to economic reasons.

Golf was added to the college’s athletic program.

The French and Spanish clubs combined into The Foreign Language Club.

May: On the 4th, the college’s golf team won the state championship. Temple Junior College resumed publication of the Templar. In order to save on the cost of printing, the college’s yearbook was published in one volume with Temple High School’s yearbook, The Cotton Blossom.

Fall: Beginning in the fall semester, the college moved from a quarter schedule back to a two-semester schedule. A Social Science Club was founded in order to discuss national and global issues.