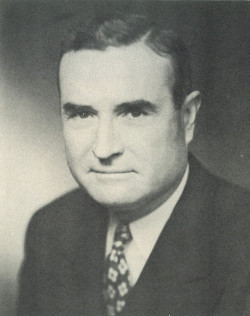 Dr. Joe R. HumphreyDr. Joe R. Humphrey became superintendent of the Temple public schools and president of Temple Junior College in the fall of 1939. He possessed a bachelor’s degree from Trinity University, a master’s degree from The University of Texas, and a Doctorate of Education from Columbia University. Before coming to Temple, he had served as the superintendent of schools in the Texas towns of Van Horn, Pecos and Olney. In the summer of 1941, Dr. Humphrey, who was a member of the army reserve, was called to active duty. Following his service during World War II, Dr. Humphrey returned to Temple and resumed his position with the Temple public school system. He left in December 1950 to take a position with the Texas Education Agency.

After 11 years of lobbying, the 47th Texas legislature appropriated funds for public junior colleges. The first appropriation was $325,000, and was to be distributed on an annual basis of $50 per capita for every full-time student.

During the spring semester, the federal government stopped funding the Aeronautics Club.

Fall: King’s Daughters School of Nursing and Scott and White School of Nursing established a partnership with Temple Junior College. As part of this program, student nurses took courses at both the nursing school and junior college. Upon completion of 60 semester hours, they were able to receive an associate degree.

Spring: In the spring semester, volleyball was added to the college’s athletic program, and a basketball team was organized for the first time since 1943.

February: On the 24th, Temple Junior College published its first newspaper. The first issue was nameless and made an appeal to the students to choose a name.  The student body chose to call their newspaper The Leopard Tales. The paper remained in publication until 1982.

May: On the 23rd, the college held baccalaureate and commencement exercises separately from Temple High School for the first time since 1928.

Fall: Beginning in the 1945-1946 school year, many of the athletic teams and social clubs, such as Golf and the Pan American and Social Science clubs, which had been removed during the war, were reorganized. Veterans of the armed services were accommodated with their own education program and social club.  The college also began offering vocational courses, which were later organized into an “Adult Education” program.

November: On the 19th, the college faculty entertained students with a stunt night, an annual activity that had ceased during the war.

December: On the 26th, the college hosted a homecoming and alumni formed the Temple Junior College Ex-Students Association. The association made the homecoming an annual event and would later be instrumental in the growth and expansion of the college.

February: On the 5th, radio station KTEM began hosting a regular series of radio programs during which members of the college administration, faculty or student body would speak about matters relating to the college. On the 10th, the college began offering academic night classes.

May: The Templar, Temple Junior College’s yearbook, was published separately from Temple High School’s yearbook, the Cotton Blossom, for the first time since 1930.

Fall: A student governing body was organized in the form of a General Activity Committee. The college began charging fees in addition to tuition for the first time, including lab fees, cap and gown fee, and registration fee.

March: On the 8th, students formed a square dance club.

Fall: A chapter of the Future Teachers of America (later the Student National Education Association) was established at the college.