Temple Junior College was founded in 1926 in response to the need for a postsecondary institution in Temple. The college is a result of the joint efforts of civic, business and educational leaders. In the early years, the college was operated by the public school system. Classes were held in the basement of the old Temple High School building. As the student body grew, so did the need for a permanent campus. A separate junior college district was established in 1955 enabling the college to build a new facility. The college moved to its present location in south Temple in 1957.

Temple College has traditionally offered pre-professional courses leading to degrees in medicine, law, education, engineering, and similar fields as well as more general academic courses that enable students to transfer to four-year institutions for baccalaureate degrees. The technical program of the college expanded with the opening of the Watson Technical Center in 1967. In recent years a wide variety of credit and non-credit classes, programs and workshops have been offered through Business and Continuing Education. Temple College became a leader in education for health professions with the opening of a new Health Sciences Center and Clinical Simulation Center in 2004.

With an enrollment of about 5,000 students, the college is large enough to maintain a flexible and varied program. It is, at the same time, small enough to provide students with opportunities for the development of leadership abilities. Small class size makes possible a close personal relationship between students and their instructors. 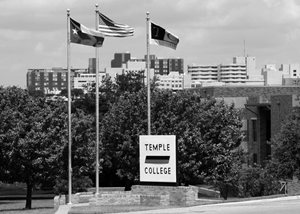 In 1996, the name of the college was changed to Temple College to reflect its role as a comprehensive college, offering transfer programs, technical education, community education, career and workforce training, and cultural activities. The college now offers day and evening classes; technical and workforce training; on-campus, online, hybrid, and web-enhanced courses; and continuing education classes. 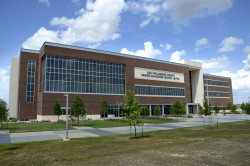 EWCHEC-HuttoTemple College also operates at several off-campus locations. In the fall of 1997, the Temple College Taylor Center opened in the historic area of Taylor to serve the increasing educational and workforce training needs of Williamson and surrounding counties. In fall 2007 Temple College, in partnership with Taylor Independent School District (ISD) and Hutto ISD, began operation of the Legacy Early College High School. Temple College is the lead institution of the East Williamson County Higher Education Center (EWCHEC), a multi-institutional teaching center. EWCHEC was established in 2007 to bring higher education and workforce opportunities to rural residents in Williamson County. In 2011, EWCHEC expanded to include a center in Hutto. After initially being housed at the Veteran’s Hills Elementary School, a permanent EWCHEC-Hutto facility opened in fall 2013.

The Cameron Education Center (CEC) opened in January 2000 to serve the educational and training needs of Milam County and surrounding areas. Temple College suspended operations at the CEC in 2015, but continues to serve Milam County residents in a variety of different ways.

The Temple College Downtown Center opened in May 2000 in the historical old Temple Post Office Building. The Downtown Center was home for the Business and Continuing Education Division which offers non-credit coursework, workshops, seminars and workforce development programs for the general public. Customized training programs for business and industry are also available. In 2013, the Business and Continuing Education Division moved back to campus and is now located in Berry Hall.

The Texas Bioscience Institute (TBI), located on the Scott and White West Campus, opened in the fall of 2006. Temple College took a leadership role in developing the TBI’s innovative educational model, which offers STEM (Science Technology Engineering and Math) based programs to promote a skilled and knowledgeable medical and biotechnology workforce in Central Texas. Texas Bioscience Institute programs serve high school students, transitioning military personnel, military dependents, displaced workers, and other certificate, associate or bachelor degree-seeking students. In January 2006, the TBI received a Middle College designation which allows dual credit learners to be enrolled in more than two dual credit classes per semester. In 2013, the TBI received the Star Award which recognizes exceptional contributions toward meeting one or more of the goals of Closing the Gaps by 2015, the Texas higher education plan adopted in 2000.