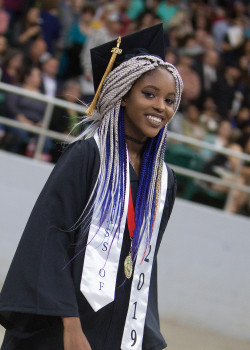 Clara Solomon participated in the May 2019 Commencement ceremony and officially completed her degree from Temple College in December 2019.Eighteen-year-old Clara Solomon has already earned both her high school diploma and a college degree. And she did it all by herself – with a lot of support from her mother and Temple College.

Clara and her mother made the decision to begin home schooling Clara in 9th grade.

“Clara is a good student, but she really struggled with math,” says her mother, Angela McGeHee. “I wanted Clara to continue to excel in her other studies while taking the time she needed for math. I realized that homeschooling Clara was the best platform for her to grow and thrive not just in her academics but also as a person.”

McGeHee did a lot of research to see how she could home school her daughter. “It was a lot of trial and error,” she admits. “I started several curriculums that didn’t work out, but eventually found an online source that worked best for Clara’s learning style.”

McGeHee learned that through Temple College’s Dual Credit program, Clara could take classes that would count toward both her high school diploma and a college degree. She took her first class at the college – a drawing class – when she was just 15.

Clara had such a positive experience in that class that she decided to pursue an associate of arts degree while she was working on her high school diploma. This meant she had to take five classes a semester plus three during the summer.

“I’m so proud of Clara and her diligence,” her mother says. “It wasn’t easy.”

Kristen Griffith, who headed the Dual Credit program at the time Clara started, says Clara is one of the first students to earn an associate degree while still in high school without participating in a special program such as the Texas Bioscience Institute.

McGeHee says she is very grateful to Temple College for providing her daughter with the opportunities and support that it did. 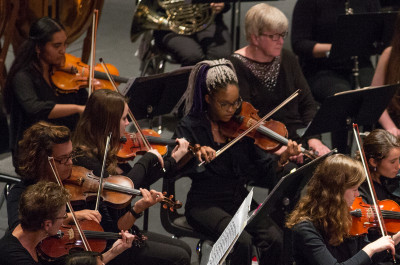 Dual credit student Clara Solomon took advantage of a variety of extracurricular curricular activities while she was attending Temple College. She is shown here performing with the Temple College Orchestra.“Dual Credit classes are a great way to expose your student to college life early on,” she says. “At Temple College, Clara was able to grow and mature so much more. She learned how to manage her work, extracurricular activities, high school and college schedules to be able to earn her associate degree. Her hard work paid off.”

Clara says the Campus Police always made her feel very safe on campus, and she was able to make friends of all ages through her classes. She also participated in extracurricular activities such as Academie Musique and tennis to interact with students her own age.

Clara’s goal now is to earn a bachelor’s degree in game design and become a game designer. She says she has been hooked on video games ever since her brother got her interested in them when she was in middle school. Playing video games was a great bonding time for the two siblings.

“I want to be able to work in a field I enjoy,” Clara says.