Jazz groups to perform at Temple College in November

On Sunday, Nov. 3, the Temple College Jazz Ensemble will perform at 3 p.m. in the auditorium of the Mary Alice Marshall Performing Arts Center. The group will play a variety of big band styles, ranging from Count Basie-style swing to modern arrangements of jazz standards. Featured composers/arrangers will include Sammy Nestico, Duke Ellington, Horace Silver, Alf Clausen and Bob Florence.

The Temple College Jazz Ensemble is directed by Colin Mason and includes both Temple College students and community musicians. This concert is free and open to the public.

A special guest ensemble – The Temple College Alumni Big Band – also will perform at the Nov. 3 concert. The Alumni Big Band is a group of former Temple College music majors who will get together for this concert only. Many of them are outstanding professional musicians who are either pursuing graduate degrees in music or who already have careers in music. 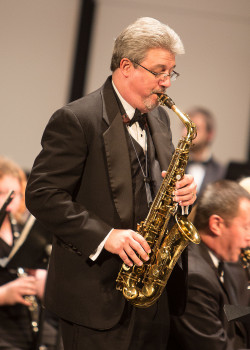 Colin MasonOn Tuesday, Nov. 5, the Temple Jazz Orchestra will perform at 7:30 p.m. in the Performing Arts Center auditorium. This concert will include a performance of “The Far East Suite, a multi-movement work co-written by Duke Ellington and Billy Strayhorn. In 1963, the Duke Ellington Orchestra went on a U.S. State Department-sponsored tour of several Middle Eastern and Asian countries. These travels, along with a 1964 tour of Japan, served as the primary inspiration for the musical suite. Among the nine movements, “Isfahan” is perhaps the best-known. This movement will feature Colin Mason playing the alto saxophone solo first made famous by Ellington’s long-time band member Johnny Hodges. The concert also will feature some additional standards of the jazz repertoire, as well as an arrangement by director Benjamin Irom of Vince Mendoza’s “Angelicus,” and a new composition by TJO pianist Dave Wild titled “Dents.”

Tickets are $10 for adults and are available for purchase in the Temple College Fine Arts Division office and at the door. The Temple Jazz Orchestra is the premier jazz ensemble in central Texas and includes the best professional jazz musicians and educators from throughout the area.

For more information on these and other events sponsored by the Temple College Fine Arts Division, call 254-298-8555.