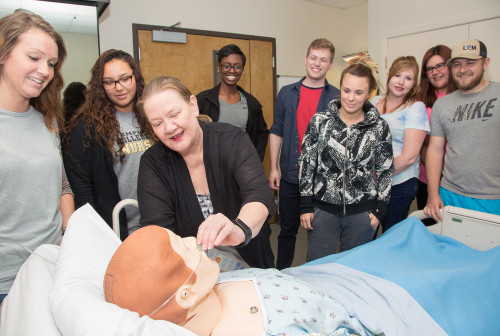 Claudia Turner with students in the Nursing Education Center.Claudia Turner, a professor of nursing at Temple College, has been selected to receive the school’s 2018 Claudia and W.T. Barnhart Teacher of the Year Award. The award includes a $2,000 stipend and the winner becomes Temple College’s nominee for a statewide teaching excellence award sponsored by the Minnie Stevens Piper Foundation.

Turner has been teaching in Temple College’s Associate Degree Nursing program since 1999. She has brought new teaching techniques into her classrooms and shared new teaching strategies with other faculty members.

Outside the classroom, Turner serves as the faculty liaison for the Temple College Associate Degree Nursing Student Organization and has helped nursing students coordinate activities such as food drives, assisting with sports physicals, and administering flu vaccines. She also serves as a faculty mentor for 14 ADN students, providing support and encouragement as well as sessions on test-taking skills and study skills.

Turner has held several leadership positions at Temple College, including serving as president of the Faculty Council. In 2016, she was one of seven faculty and staff members from the college who were selected to receive awards from the National Institute for Staff and Organizational Development (NISOD). In 2018, she was selected to be among the first recipients of the Dale P. Parnell Distinguished Faculty recognition presented by the American Association of Community Colleges (AACC).

“Claudia is truly a leader for student success, not only in nursing, but throughout the college,” said Dr. Glenda O. Barron, president of Temple College.

May 13, 2018 |
Awards and Recognition Faculty
Previous