The Battle of Little Bighorn is the most written-about battle in U.S. history.

But while some 3,000 books have been written about the battle, and it’s famous American calvary commander George A. Custer, few authors have had as much material to work from as Michael Donahue.

Donahue, who has chaired the Temple College Visual Arts Department since 1979, has spent the past 30 summers working as a park ranger/historian at Little Bighorn Battlefield National Monument in Montana. He is the longest-serving ranger in the park’s history.

While he is working at the park, Donahue actually lives on the battlefield, which has given him an intimate knowledge of it. And he has access to the park’s archives and library – something most writers don’t have. 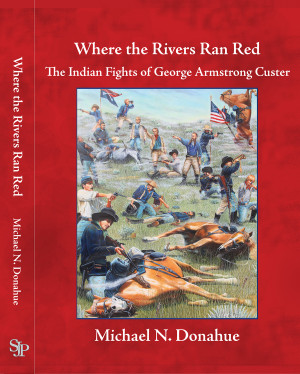 This summer, Donahue Is drawing from materials he has gathered over the past 45 years to publish his second book on Custer and the Battle of Little Bighorn. The book is titled Where the Rivers Ran Red – The Indian Fights of George A. Custer.

While Custer is best known for the Battle of Little Bighorn, which took place in 1876, Donahue says he actually fought three other battles with the Indians before that one. His new book is the first to detail all four battles.

To do research for the book, Donahue visited all four of these battlefields, one of which has only recently been discovered. The book includes previously unpublished archaeological evidence that Donahue was given by archaeologists who have done archaeological digs at the Little Bighorn Battlefield. Donahue himself participated in two of the 10 digs done at the site.

The book also includes eight photos that have never been published before. “Most books always use the same photos,” Donahue says. “I have been able to collect the unpublished photos from different people over the years.”

Donahue used his artistic skills to draw 23 original maps for the book and paint the picture that appears on the cover of the book. The painting, titled “Custer’s Last Stand – Where in the Hell is Benteen?” is a composite of 30 different images from the battle and is all historically accurate – including the landscape and uniforms. The painting features Custer looking for his captain, Frederick William Benteen, who was four miles away at the time of the battle.

Donahue says he first learned about the Battle of Little Bighorn while taking a Texas history class in high school. After reading the book “Showdown at Little Bighorn” by Dee Brown, he was hooked.

But Donahue says that book – and most of the other books written about Custer and the battle – are not historically accurate.

“Most writers take sides,” Donahue says. “They either love him (Custer) or they hate him.”

Likewise, Donahue says most of the movies made about the battle are ‘propaganda films’ that were meant to sway audiences one way or the other. For example, he says the 1941 movie “They Died With Their Boots On” featuring Errol Flynn and Olivia DeHavilland was designed to encourage Americans to fight the Japanese, while the 1971 movie “Little Big Man,” which came out during the Vietnam War, is very anti-government.

In his writing, Donahue says he tries to be as objective as possible. “I don’t have an agenda,” he says. Donahue’s first book, Drawing Battle Lines – The Map Testimony of Custer’s Last Fight, was published in 2007.

A hardcover collector’s edition of Donahue’s new book can be ordered on his website, michaeldonahueart.com. Donahue also has an article coming out this summer in True West magazine that is based on research for the new book.